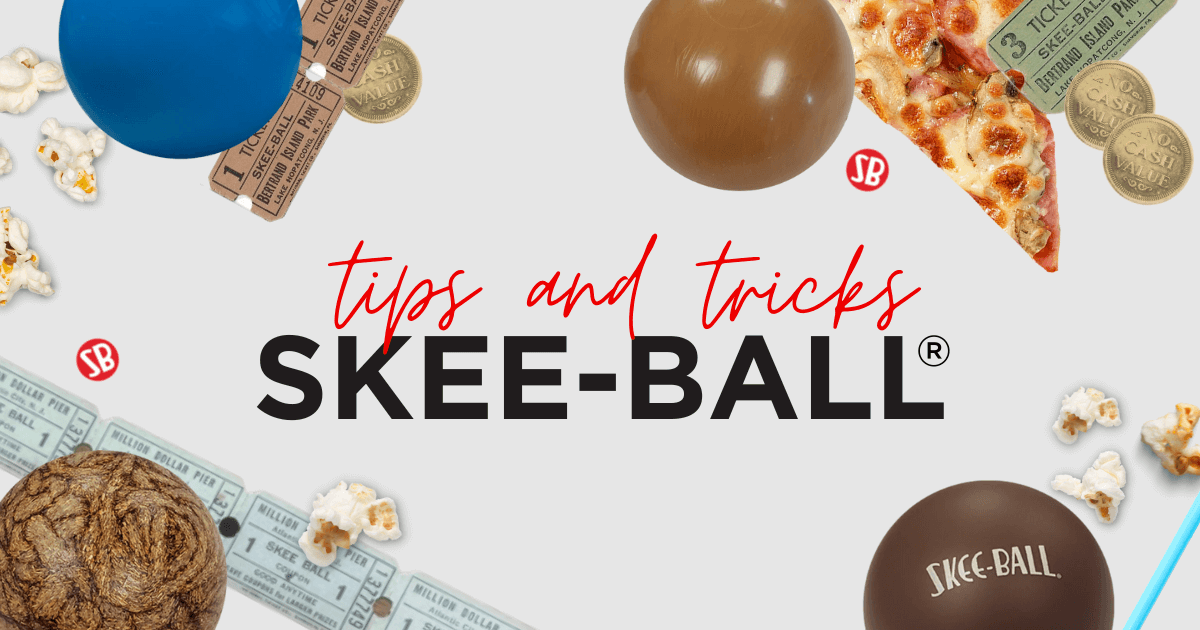 Henry Ford had just launched the Model T, costing less than one-third what other automobiles on the market sold for. Admiral Peary and Matthew Henson were about to become the first people to reach the North Pole. The ball dropped for the first time ever in Times Square to mark the beginning of the new year. And Joseph Fourestier Simpson was ready to launch the best, most marketable invention of his life. Skee-Ball®.

For the last 115 years, original Skee-Ball® alleys have connected generations, providing simple fun for a lifetime of shared playful memories. For some, the Skee-Ball® brand brings to life the sights, sounds, and smells of the 1920’s boardwalk. For others, it comes with the childlike wonder of a birthday party at the local arcade.

Whatever your alley rolling expertise, one thing rings true for every person that steps up to give it a roll on this classic alley roller: It's a game of skill that's easy to play, but tough to master.

So, here's some insider info...

HOW TO PLAY A CLASSIC SKEE-BALL ALLEY

The basics behind the workings of Skee-Ball alleys are pretty straight forward. It is a game of skill that is widely accessible to players of all kinds. When it comes to the rules for Skee-Ball games: games are played by rolling a ball (or typically nine) up an inclined lane and over a "ball-hop" hump that jumps the ball into bullseye rings, or in official vernacular - pockets. The object of the game is to collect as many points as possible by having the ball fall into holes in the rings which have progressively increasing point values.

While it might seem simple to just roll the ball towards a variety of pockets, there is a lot to consider before stepping up to the lane - if you want to level up your skills.

TIPS FOR IMPROVING YOUR GAME

If you're on the lookout for tricks and insider tips for playing original Skee-Ball arcade games, you're in the right place.

Like a lot of sports, the preparation before the shot or main event is always key. Think the back swing before you nail the golf ball, the form at the free throw line, or the concentration that comes with shooting that PK. When rolling on a Skee-Ball alley, your stance is just as important - if not more for the sake of stability - that your upper body finesse. Make sure that your legs and feet are comfortable and stable, place your non-dominant foot slightly forward, keep your knees comfortably bent, and make sure that you are balanced throughout the shot.

Take it from Skeeter. If you've yet to hear Skeeter's story, check it out (scroll to the bottom).

"Skeeter rolled so much that one day he found himself stuck in his usual Skee-Ball stance. Although he tried and tried to break out of his Skee-Ball stance, (and boy, did he have a great stance), he couldn’t manage to wiggle himself free. So there Skeeter stood, in his Skee-Ball stance - comfortably and very happily, day after day."

With those tempting 100 pockets calling your name, it sometimes seems intuitive that you'd always go for the highest point value. Plus, there are two of them!  A better strategy is to aim for the 40-point pocket, as the direct center of the playfield.

Aiming for 40 is a solid strategy - if you're right on, 40 points adds up quick. If you end up a little off, 50 and 30 are great options as well. You get nine balls, and if you manage to put all of them in that hole, you’ll have 360 points - a reputable Skee-Ball alley score.

From there, if you’re going big by trying to hit one of the small pockets, you have a better chance of hitting the mark if you aim for the back of the pocket.

Release too early...thunk. Release too late and that ball will fly. Too gently won't get you up to the playfield, and too much power will knock it up to the playfield ceiling and likely right back down into the 10 pocket. Find your sweet spot when it comes to the perfect release point, and don't be afraid to give it some intentional oomph!

Skee-Ball alleys are made for the rolling of the ball, so when thinking about your stance and power - stay low and swing your arm back from the shoulder. Let it roll nice and straight and you'll find your grove of consistency in no time.

Practice makes perfect (though we think you're perfect just the way you are). Visit your local arcade. Or if you're lucky enough to bring the arcade home, practice for hours on end with your Skee-Ball home arcade.

Consistent play paired with these Skee-Ball tips should help you improve your game.

5. Bonus Tip: Test Your Skill at the Bank Shot.

Just like in basketball, there are no rules saying you cannot use your "backboard." A Skee-Ball alley bank shot is a roll that makes its way up to the playfield and hits the back or side wall of the cabinet before dropping into one of the pockets. Because the 100 pockets are small and tucked into the top corners, bank shots can be especially effective at increasing your score quickly with high-point shots. It takes a little extra finesse, but once you have your stance locked in, test out your technique.

The game is yours to make it. We're just here to give you tips along the way...and cheer you on.